Send in the clowns … and I’m gone

I have never liked the circus. Mum and dad only took us once that I can remember, but I had a miserable time. Those poor animals. All those people. And the clowns. Man, those clowns would come running up into the stands and I’d be scrooched back so far on my bench in sheer terror and revulsion that I practically went over backward.

Now that I’m grown up, I don’t run screaming, but I will back away slowly and leave the room. Apparently I share this dislike with Johnny Depp and a number of other people who are willing to admit it. There is just something about a being that is supposed to be human and isn’t that really makes me uncomfortable. You can’t see who they really are under all that makeup and those goofy costumes. 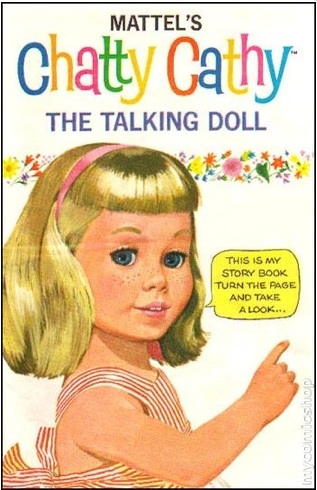 When I was a kid, I had a doll called Chatty Cathy, which Wikipedia tells me is a doll manufactured by the Mattel toy company from 1959 to 1965. She was about the size of a baby, and her eyes opened and shut, and when you pulled a string in her back, she said things. I think you could even fill a cup inside her and she’d wet the bed. Eww. Anyway, mum could never figure out why Chatty Cathy sat on the shelf in my closet and didn’t get played with. Finally she went to Goodwill, where a collector buffed her up and sold her for a hundred bucks several decades later. But I digress.

Chatty Cathy behaved as if she was real, but she wasn’t. Small child backs away slowly. How about Toy Story 3? That doll? Yup. Creepiest darn thing I’ve ever seen. Dead ringer for Chatty Cathy, in my mind.

Now I’m writing steampunk, and it turns out that Claire Trevelyan doesn’t like automata. Not the mother’s helpers, which look a bit like a bronze breadbox and zip about the house doing one’s housework. I’m talking about an automaton that some use as a butler and other household help. Unfortunately, automata are terribly fashionable in the Americas.

This is going to get ugly.

Magnificent Devices: Overview
Genesis of a new character
Sign up for Shelley‘s mailing list & begin the adventure with “The Abduction of Lord Will.” Join the flock!
up