A Lady of Integrity—Overview + Excerpt 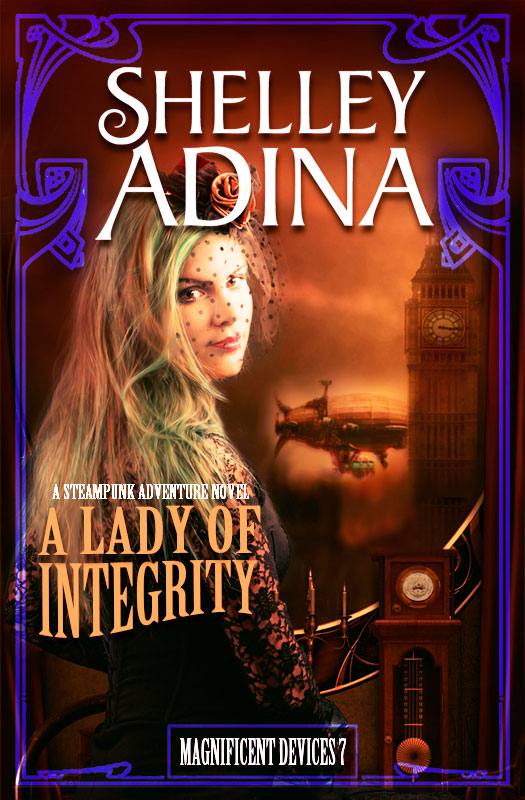 But there is a brooding evil waiting for them in Venice … an evil that would just as soon put an end to the flock’s interference once and for all. Add to this an innocent friend’s return, a young man’s confusion about his future, and a pair of secret agents who would prefer that women not become involved … and the situation clearly calls for the inner resources of a lady of integrity.

“I absolutely, positively forbid it,” Lady Claire Trevelyan said with a firmness that came of complete conviction. “There will be no pink of any kind at my wedding–and that includes flowers and your dress, Maggie.”
“But Lady–”
“Of any kind.”
Maggie Polgarth gazed longingly at the illustration of the latest creation by Madame du Barry, its roseate glory taking up the entire center spread of London Home and Hearth magazine, that popular glossy publication that came in the Sunday edition of the Evening Standard. Having remembered her travails at the hands of that same modiste, Claire was seriously reconsidering the renewal of her subscription.
“Don’t you think you are being somewhat harsh, dearest?” Andrew Malvern inquired from his chair by the fire, where he was engaged in a lively hand of Cowboy Poker with Snouts McTavish, Lewis Protheroe, and Lizzie Seacombe, none of whom were showing any respect whatsoever for his age and consequence.
“Pink is far more harsh to me than I am to it,” Claire informed him, her heart warming at the contented if keenly competitive picture they made. “On this point I will not be moved. The Mopsies will precede me down the aisle in tawny silk with emerald green and sapphire blue velvet sashes, and Snouts will escort me wearing a green waistcoat with as much embroidery upon it as he pleases.”
“Peacocks won’t have anything on me,” Snouts said absently. “I’ll see your toothpick and raise you a thimble, Mr. Andrew–though it will do me no good. Lizzie is going to trounce us all and you’ll be wishing you’d folded five minutes ago.”
And so it proved to be. With a cry of aggravation, Andrew threw down his unsuccessful hand, congratulated Lizzie on her victory, and came to join Claire on the sofa, where she was curled up with her engineering notebook and several sharp pencils she’d barely managed to keep the boys from tossing in the pot as bets.
“Is it time to order more toothpicks?” Claire asked, raising her face and receiving a kiss that was not quite proper considering they were in front of the children.
“We can get another night out of this lot.” Andrew folded himself next to her and had a look at her drawing. “It’s a lucky thing no one actually uses them for picking teeth. What are you working on? A wedding gown?”
She poked him in the ribs with the eraser end of the pencil. “This is a dirigible, sir, and if you are implying I ate one too many Yorkshire puddings at dinner, then you had best watch out for the business end of this pencil.”
“I would never imply any such thing. You are perfection, and would be even if I were Jack Spratt and you his legendary wife.”
Claire narrowed her eyes at him and hastily, he returned his attention to the drawing. “Ah, the automaton intelligence system.”
“Indirectly,” she said, her pencil once again busy on the paper. “The count has already adapted it for the long-distance ships that fly to the Antipodes, though they are so much larger than Athena. But efficient flight is more than having more automatons built into the hull. It is also a matter of engines. There simply must be a better way to power these great Daimler engines. Half the holds are filled with coal, and water condensers are heavy. I will find it, Andrew. Before I arrive next week, I want to have a design firmly in my mind, so as to waste no time once I actually take up my work in the laboratory.”
“And you have settled this with Count von Zeppelin?”
“No,” Claire said with some reluctance. “We have not actually discussed my duties in detail yet. But I am quite sure he will allow me to work on this project. It can only benefit the Zeppelin Airship Works in the long run.”
She spoke as though it were a foregone conclusion, when in fact she did not know exactly what the count had in mind for her when she took up her position at the greatest manufactory of airships in the world. Their correspondence had not gone into detail, and their many conversations during her university career had been directed more toward philosophy and mechanics than specifics such as where her laboratory would be or whom she would hire to assist her.
“I wish Alice would write again,” she said, following that thought. “She and I would make a marvelous team, and I have heard nothing since I answered that peculiar letter.”
“At least she says she and Jake are all right,” Maggie put in, now engaged in doing the crossword puzzle in the back of the newspaper with Lizzie while Lewis diagrammed the hand they had just invented. He sent the spreads in once a month for the paper’s back page. No one had yet discovered that the mysterious poker player who provided the most maddeningly clever variations on the popular game was actually the owner of the Gaius Club, membership to which was so sought after among the young and wealthy that there was a waiting list a year long.
“I am dying to hear the story,” Claire admitted, “but I confess I am a little worried about what could have made her flee the Duchy of Venice in such a fashion, and why she asked for my help when she is safely in Bavaria. It does not add up.”
…to be continued…

“It’s another excellent book in an excellent series. The world is wacky and immense fun, the stories exciting and all well written and well paced (and with chickens for even more fun). But the backbone of this great series is and has always been the characters–their issues, their layers, their complexity, their solid relationships and loyalties all elevated a good book to a really great one.”
—Fangs for the Fantasy, on Maggie’s book, A Lady of Spirit

5 thoughts on “A Lady of Integrity—Overview + Excerpt”

On Location in Venice
Camille Elliot—Interview with a Regency author
Sign up for Shelley‘s mailing list & begin the adventure with “The Abduction of Lord Will.” Join the flock!
up