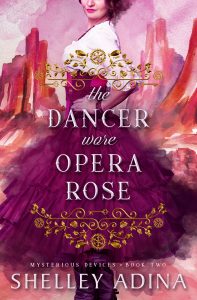 Within ten minutes of their airship being moored to its mast, Daisy Linden became convinced that there was no other city quite like Santa Fe. Not only in the Texican Territories, mind you. But in the entire world.

The colors. Oh goodness, the colors!

She had in her paintbox Burnt Sienna—Mars Orange—Vermilion—Aurora Yellow. But these could hardly do justice to the rocks and mesas, the spires and even the buildings, for they were all those and more. And the shadows! Indigo, Olive Green, Payne’s Gray—even a blue that went straight past India Ink to something the midnight sky might make all its own.

“But we have been here before, Daisy,” her sister Frederica said as she picked up her valise in one hand and the handle of the late Emma Makepeace’s traveling trunk in the other. “It is not as though these marvels are new to you.”

“I know, dearest. But while I remember that the colors enchanted me, all the good was blotted out by the horror of our return.”

“I hope our visit this time will be a better one.”

Daisy hoped so, too. Desperately. For there was no longer any more time to lose in the search for Papa, who had gone missing nearly two years before. Granted, they had learned from Captain and Lady Hollys a few weeks ago that Papa had been alive and well back in April, when the couple had left him in Reno, the crossroads city of the Royal Kingdom of Spain and the Californias. According to their information, he had set off for Santa Fe to look for his family.

What were the odds that their searches for each other might come to a happy conclusion right here?

Even had she known the odds, Daisy would not have laid money on them. She was not a betting woman. Ladies did not indulge themselves in such worldly pursuits. But she was rich in hope, and she dealt that out to Fate with a liberal hand.

They boarded a steam conveyance with slatted benches and open sides that the conductor assured them would take them into the center of the city. Freddie held on to her hat as the steambus picked up its pace to quite an alarming speed, for there was nothing to hinder its way but peculiar rolling bushes and scented squatty pines and the ubiquitous Burnt Sienna rocks of this part of the world.

“Do you not think we ought to make inquiries at the airfield? Of the ticketing office, the taverns, and a few of the inter-territory ships?” Freddie asked Daisy above the racket of their going.

They were not the only passengers; most of the people aboard the short-haul packet from Denver were riding the vehicle, too. One hated to raise one’s voice with one’s private concerns, but Daisy could not see how to avoid it.

“We shall certainly do so as soon as we may,” she replied. “But for now, I feel we must wait upon the man in charge of the detachment of Texican Rangers here. I wrote to him from Bath some weeks ago, and I am ashamed to say we are two weeks past the day I told him I would be here. But it was unavoidable, of course.”

…or you could preorder it