Good heavens, has it really been a month since I’ve blogged? Chalk it up to a crazy schedule. I was on the road for 3 weeks in March, doing a Signing Safari up the West Coast that included three states and a province. I was home for a week, then had to blast up to Oregon for another signing at the Barnes & Noble in Medford. I couldn’t stand another day on the road, so when the day was done, I blasted home again—left at 5:30 pm and pulled into my driveway at 1:00 am.

Meanwhile, things have been perking in the book department. The audiobook of Lady of Devices is in its final stages of production. We did a few second-pass tweaks and actress Fiona Hardingham tells me she’ll be uploading the files to Audible this weekend. 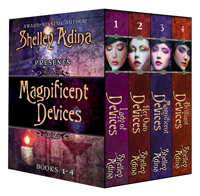 I’m also getting the “Claire Quartet” formatted and ready to go up next week. The exceedingly talented Kim Killion created a 3D “boxed set” image for it—isn’t it cool?

To format, I’m trying something new and different, and using Pressbooks.com. This FREE new tool is based on WordPress, and you upload each chapter as though it were a blog entry. You can divide your book into Parts (i.e., Lady of Devices, Her Own Devices, and so on), then Chapters, and include Front and Back Matter as well as the cover images. I’m going to be really interested in seeing how this works, because if it does, I’ll be shouting their name far and wide!

Speaking of which, time to get back to formatting …

Christian Fiction Scavenger Hunt: March 22–24, 2013!
Magnificent Devices 4-book set is now available!
Sign up for Shelley‘s mailing list & begin the adventure with “The Abduction of Lord Will.” Join the flock!
up