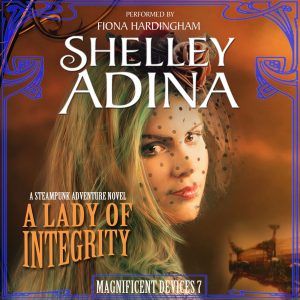 A number of you have been asking when the next Magnificent Devices book will be out in audio. I’m happy to say that today, September 6, book seven—A Lady of Integrity—comes out! It’s available at all the usual places, plus in CD boxed sets (which make lovely Christmas presents).

But there is a brooding evil waiting for them in Venice … an evil that would just as soon put an end to the flock’s interference once and for all. With an innocent friend’s unexpected return and a pair of secret agents who would prefer that women not become involved … the situation clearly calls for the inner resources of a lady of integrity.

“It’s another element I love about these books; from Claire to Gloria to Alice to Lizzie and Maggie to Lady Dunsmuir, the women in this series generally like and respect each other. Other women are not required to be lesser—weaker, more cowardly, less intelligent—in order for Claire to be awesome. She is not an exceptional woman, she is an awesome woman among awesome women.” —Fangs for the Fantasy, on A Lady of Integrity

2 thoughts on “A Lady of Integrity audiobook releases today!”

Fall Fantasy contest!
Amish Wisdom Harvest Bounty Giveaway!
Sign up for Shelley‘s mailing list & begin the adventure with “The Abduction of Lord Will.” Join the flock!
up