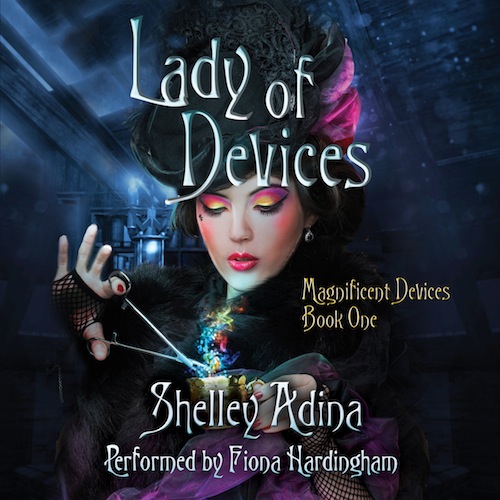 As any author will tell you, writing is hard work. If you’re self-publishing, there are other kinds of work: hiring cover artists, editing, marketing. But in the process of turning Lady of Devices from a novel into an audiobook, there are moments when work turns into something else.

After we settled on a narrator—the amazing and versatile Fiona Hardingham—the next thing to do was listen to the first 15 minutes of audio and approve it. That took about one second—the time my finger took to move from Play to Approve 🙂

Then Fiona went into the studio and began recording chapter after chapter. All 29 of them, plus the epilogue, plus what they call the “intro” and “outro,” the legal language that comes before and after the story. I can’t tell you how many hours she spent in that booth, bringing my characters to life. Then the files came to me for proofing, where I made notes of any slips of the tongue or misread words. And I know how long that took: three solid days.

But there were no blanks on the proofing sheet for the moments when I laughed with delight, such as the moment when Snouts McTavish tumbled out of the dockside warehouse, opened his mouth, and spoke. Or the place where I growled at Lord James Selwyn and his tone of insufferable arrogance. Or the place where I giggled at Lady Catherine Montrose’s insipid silliness or Lady Julia Wellesley’s needle-like disdain.

Fiona is a professional actress. I knew that. But what I didn’t know is that she has a rare talent—the ability to take what she calls “notes,” which are my short descriptions about the characters, and turn them into real people with separate voices, backgrounds, and emotions. Her voice breaks in a soft moment. It hardens with male authority. And it even creates subtle differences between the personalities of the Mopsies—which is no mean feat, I can tell you.

I cannot wait for this audiobook to be released to the world. Once you hit Play and fall into the Devices world, you’ll never want to leave.

The Devices series spotlighted in BTS eMag
Christian Fiction Scavenger Hunt: March 22–24, 2013!
Sign up for Shelley‘s mailing list & begin the adventure with “The Abduction of Lord Will.” Join the flock!
up