One of the Magnificent Devices characters that people seem to enjoy most is Rosie the chicken, that globetrotting red hen who is ready for any adventure, as long as there are bugs and seeds at the conclusion of it.

As many of you might know, I live in an urban area and I rescue chickens. You would not think there would be many chickens in need of rescuing in a place where Apple no longer means those things that grow in orchards. But there are. My most recent rescue was of a black Serama mix who had been living in a city park for nine days, being fed by neighborhood children (may blessings fall upon their heads). In the course of doing this, I’ve met a number of birds of extraordinary personality and intelligence, and have come to believe that anyone who thinks chickens are dumb has (a) never met one; and (b) if they did, were just not paying attention.

So when Claire mounted the stairs of the dockside squat in book one, it was quite a surprise to me that one of the first things she laid eyes on was a miserable hen in a birdcage. It was no surprise, however, when she decided to rescue the bird on the spot. I’d have done the same myself. Rosie belonged to Snouts, who named her after a barmaid for whom he suffered a case of unrequited love. But her personality is based on a couple of chickens who have been in my own flock: Lizzie-bit, an ISA Brown with a taste for travel; Kirby, a hen of no discernible bloodline but a calm and loving personality; and JoJo, the Queen of Everything, from whom Rosie gets her Queen Victoria–like traits. 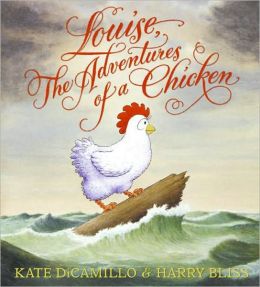 Rosie is also the literary descendant of Louise, whose adventures were chronicled most ably by Kate DeCamillo, in Louise: The Adventures of a Chicken. While it is true that chickens like to stick pretty close to their henhouses (safety being the primary directive when one has eggs to think about), there is the occasional bird who likes to see what is over the horizon, if she is with people she trusts and there is the hope of seeing the henhouse again. Rosie is this kind of bird.

Long may she fly.

1 thought on “Rosie the chicken”

Two Magnificent Devices books on sale for 99 cents!
The Healing Grace series. Also, chickweed.
Sign up for Shelley‘s mailing list & begin the adventure with “The Abduction of Lord Will.” Join the flock!
up