I’m delighted to let you know that Devices Brightly Shining and Fields of Air are now available in audiobook, narrated once again by the peerless Fiona Hardingham. And here’s a bonus: If you buy the CD set, Devices Brightly Shining is included in the box (they make great Christmas presents. Just saying)! Find them at your favorite online retailer: 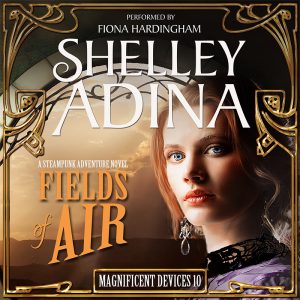 Her father may have sacrificed his own life to save hers, but heiress Gloria Meriwether-Astor is finding it difficult to forgive him. After all, how many young ladies of her acquaintance will inherit wealth, beauty, and a legacy of arms dealing? Now the Royal Kingdom of Spain and the Californias is about to declare war on the Texican Territory and Gloria simply will not allow it.

In company with Alice Chalmers and the crew of Swan, along with a lost young Evan Douglas seeking reparation for his own sins, she takes to the air. Her intention—to stop the train carrying the final shipment of monstrous mechanicals into the Wild West. But they should have known that making a deal with air pirate Ned Mose in exchange for his help could never end well.

What is a lady of principle to do? For the lives of thousands may depend on her ability to stop the war … even if it means losing everything and everyone she has come to love …

“[Gloria is] not like any of the other protagonists, who must fight for what they want, their career, the life they choose, the family they value—Gloria doesn’t have any hard choices she HAS to make. But she makes them anyway. She makes hard choices because they’re right, because of principle, because of morality, perhaps even out of a need to change her family and her business’s legacy: but Gloria’s is ultimately the most unselfish path and that is unexpected.” —Fangs for the Fantasy, on Fields of Air