Herb of Grace by Adina Senft

Some of you probably know that I write under two different names–Shelley Adina for the steampunk, of course, and Adina Senft for women’s fiction set in Amish country, with Amish characters. Some of you may also know that I grew up “plain,” so while I wasn’t Amish, writing about them isn’t the stretch it might be otherwise.

On August 5, my fourth Amish novel comes out, so I wanted to tell you about it in case it might interest you! These are quiet, gentle stories in which nothing blows up and everything takes place in about two square miles of Pennsylvania countryside. Jane Austen once famously said that her books were a two-inch bit of ivory on which she “paints with so fine a brush.” I’m no Austen, but writing these books feels a little like that.

For lots more information about these books, visit my other self’s website. 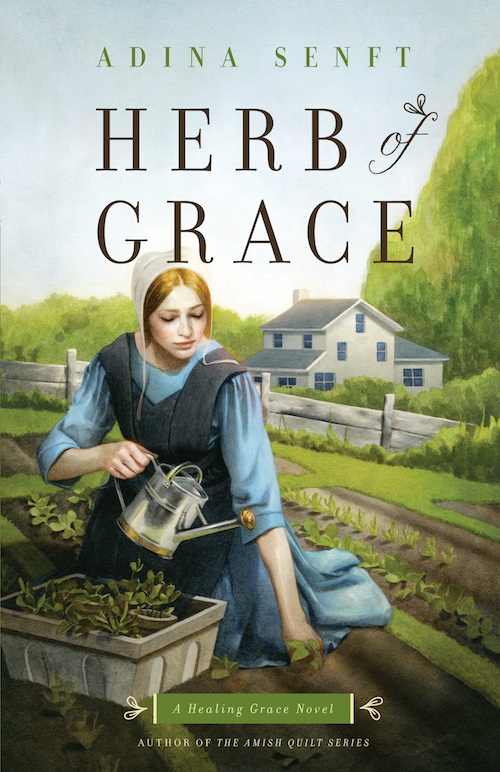 Amish widow Sarah Yoder has been struggling to raise her two teenaged sons and provide a home where family and members of her Old Order Amish church can find fellowship and friendship. Though she is close to her in-laws, lately it feels like her relationship with her boys is splintering. Her stepson Simon wants to move out west to find work. And her youngest, Caleb, is spending far too much time over at the tumbledown home of a man who left the church long ago. Henry Byler only returned recently to Willow Creek when he inherited the family farm—under protest—and now seems caught in a struggle between the faith of his childhood and the world he’s come to know.

Ruth Lehman, the local Dokterfraa, believes Sarah should use her gift for growing plants to become an herbal healer, too. Sarah is reluctant, however, uncertain if caring for others will take her away from her family—the place where she believes God wants her. But when she feels called to help members of her community, she soon discovers that the heart can be scarred as deeply as the body. As she compiles her herbs, she waits for God to do his healing work in a man who rues a harsh decision, in a lonely prodigal who has lost everything, and maybe even in a herbalist-in-training who firmly believes she will never love again.

“Senft is a talented author and her research on various herbs is a welcome surprise to readers. The story incorporates facts about herbs, what each of them can be used for and what will happen if used incorrectly. This sweet romance has a believable storyline with a lot of heart.”
—4-star review from RT Book Reviews magazine

Medicinal herbs have been part of the human experience for thousands of years, as evidenced by the multitude of folk names some of them have collected. When I was researching the Healing Grace novels, I realized that people often summed up some spiritual property in certain herbs through the names they gave them, and the idea for this series was born.

In each novel, the folk name reflects a healing property in the herb itself. But going a little further, God can effect a similar healing process in the spirit. So, in Book 1, “herb of grace” is the folk name for rue, a bitter and astringent herb used in small quantities for ailments of the digestive system. And as we know, rue is also a verb meaning to be sorry for something one has done in the past … but there is a world of difference between ruing one’s mistake and coming to that place of repentance where God’s grace can begin its healing work …